Can OLIVE OIL reverse the signs of ageing? Mother tries the £2 beauty hack on her face for one month - but is she convinced?

By Mieka Smiles For Mailonline

Olive oil has been used as a beauty treatment for centuries.

Cleopatra was said to use it on her skin alongside milk baths and ancient physicians noted its use in the role of massage.

Now the seemingly age defying French-born model Yazemeenah Rossi, 60, from Malibu, has revealed that smothering olive oil on her face - and rapeseed oil through her grey locks - are her key anti-ageing beauty hacks.

Scroll down for video 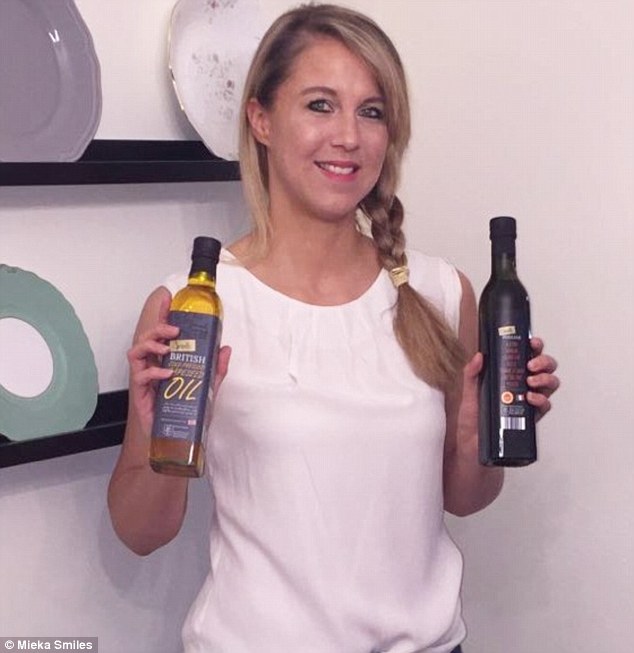 Mieka Smiles, 34, from Middlebrough, a mother-of-two, was inspired by age-defying model Yazemeenah Rossi, aged 60, to use olive oil on her face and rapeseed oil on her hair 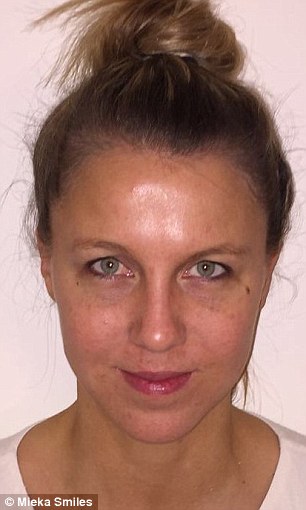 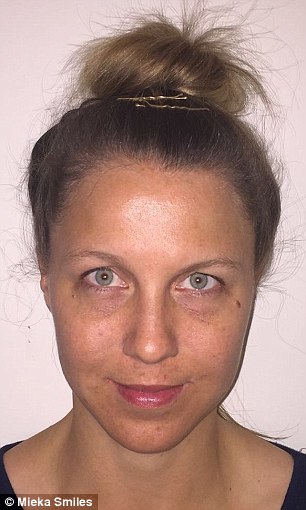 Week one of Mieka's olive oil regimen, left. The bottle of oil cost just £2 and there was no particular technique to applying it - just pour and smother. A month of daily use later and Mieka noticed her skin was less shiny and blemish-free, right

But can the cheap kitchen cupboard staples really help to turn back the hands of time like they appear to have for Yazemeenah, who has fronted campaigns for Marks & Spencer and JD Williams?

Mieka Smiles, 34, a writer and mother-of-two, from Middlesbrough, Teesside, puts it to the test for a month. Here's how she got on...

'Ooh, I'll oil you up,' remarked my ever hopeful husband.

It was a typical (mostly ignored) response from my other half.

But I guessed that would be the last of the amorous comments for at least a month given I'd spend most of it looking like an oily chip. 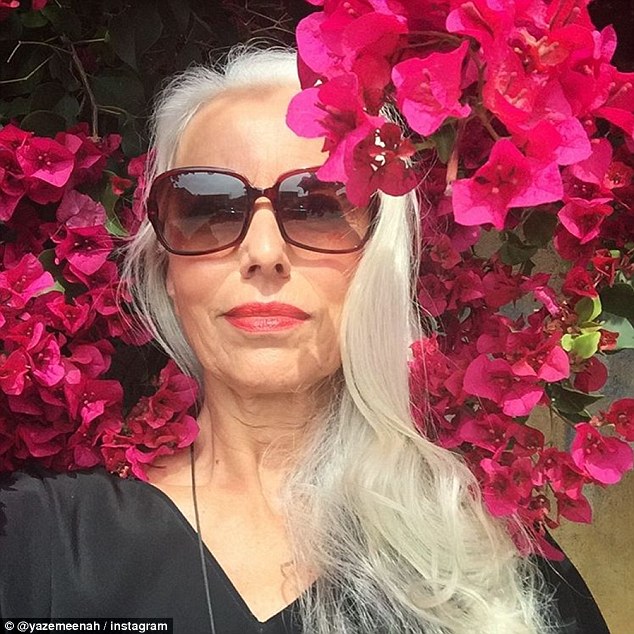 Yazemeenah, from Malibu, has revealed that smothering olive oil on her face - and rapeseed oil through her grey locks - are her key anti-ageing beauty hacks

I was all set try out a beauty hack championed by stunning Marks & Spencer model Yazemeenah Rossi, 60, who looks at least 20 years younger than her years in my reckoning. 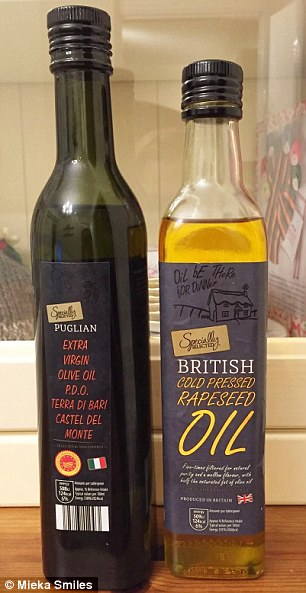 Mieka was intrigued by the idea of putting oil on her face and hair, and is keen for any non-surgical anti-ageing hacks

Despite Botox and fillers being a popular option for others my age, I'm also a huge hypochondriac and convinced the effect would leave me looking more weird than wonderful.

So I was intrigued as I was hopeful about trying out the entirely natural wrinkle busting regime.

There was no great technique to this £2 beauty tip – just pour and smother.

I decided to apply the oil before bed as makeup wouldn't sit on top of it.

The first thing that I noticed was the smell of the oil. It wasn't unpleasant at all, but not a smell I wanted as my signature fragrance.

Application was straightforward, although you do need to take care with pouring it into your hands.

It actually felt like a very luxurious facial massage and not in any way greasy. It had the texture of an expensive emollient.

A point of caution: eyes.

Mine aren't particularly sensitive, but the oil did sting when rubbed into them and so I avoided the area. A shame given that's where my wrinkles are rapidly accumulating.

I was conscious of the oil as I laid my head down of an evening, but come morning the oil was gone.

I'm not sure if it had rubbed off onto my pillow – as there was certainly no evidence of that – or if it had just worked its way into my skin.

A good splash of warm water was enough to get my skin ready for my daily pile of makeup.

Over the course of the month my skin felt smoother to the touch and certainly more supple. Kind of the effect you'd expect from an expensive facial. 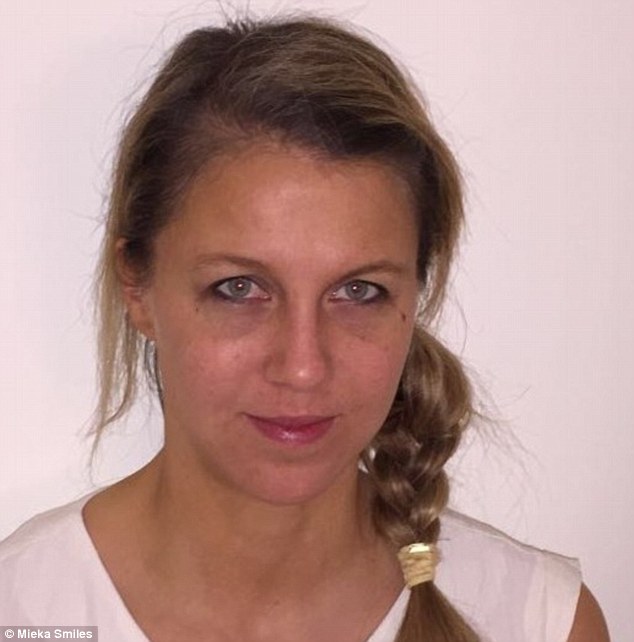 Week one: Mieka did not have high hopes for the regime, but she smothered her face with olive oil every night before bed

It also had a more even tone. I found that my skin was clearer too with fewer breakouts: possibly not something you'd expect after rubbing oil directly onto your face. And quite shockingly, less oily.

As an acne sufferer in my younger years, I would have tried anything to clear my skin. A quick Google search shows that many in that situation now are giving olive oil a go with interesting results.

However, disappointingly, I didn't witness any actual reduction in my existent wrinkles. And the uber wrinkle between my eyes on my forehead didn't budge.

Can any treatment really promise that though?

I'll certainly continue with the regimen: cheap, effective and all-natural, with a host of benefits. 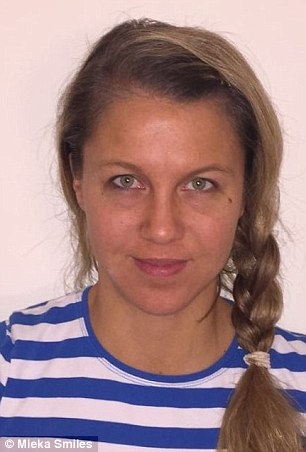 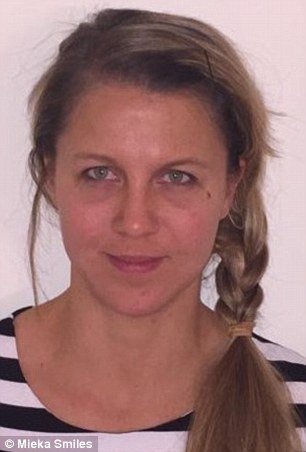 Week two (left): She was consciuous of the feeling of the oil when she laid down to sleep each night, but come the morning the oil was always gone. Week three (right) Mieka noticed her skin becoming more supple 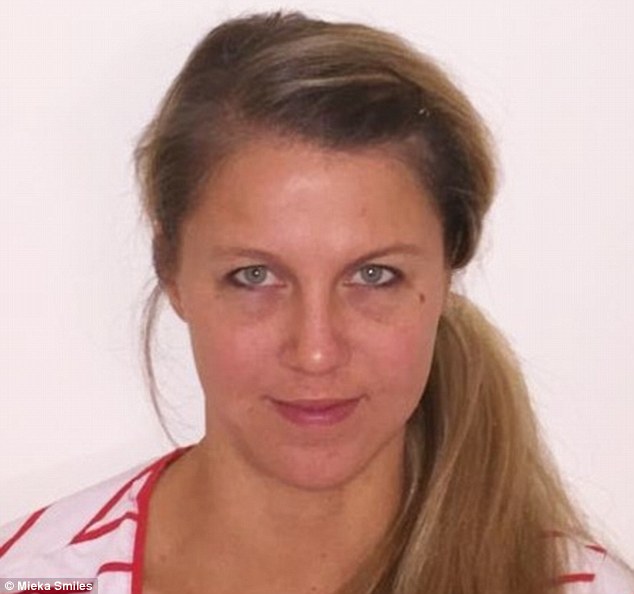 Week four: Over the course of the month Mieka found that her skin became clearer and she had fewer breakouts. She also found her face was less oily

Smothering oil on my hair is not an entirely new concept. I can remember the warm-up hair oil treatments of the Nineties, pinched from my mum's stash.

My hair is highlighted and so definitely in need of anything that will offer an intensive condition.

Application, once again, was pretty straightforward but it wasn't a nice job.

My hair felt absolutely thick with oil that smelled of grass. It was also difficult to judge how much to use. 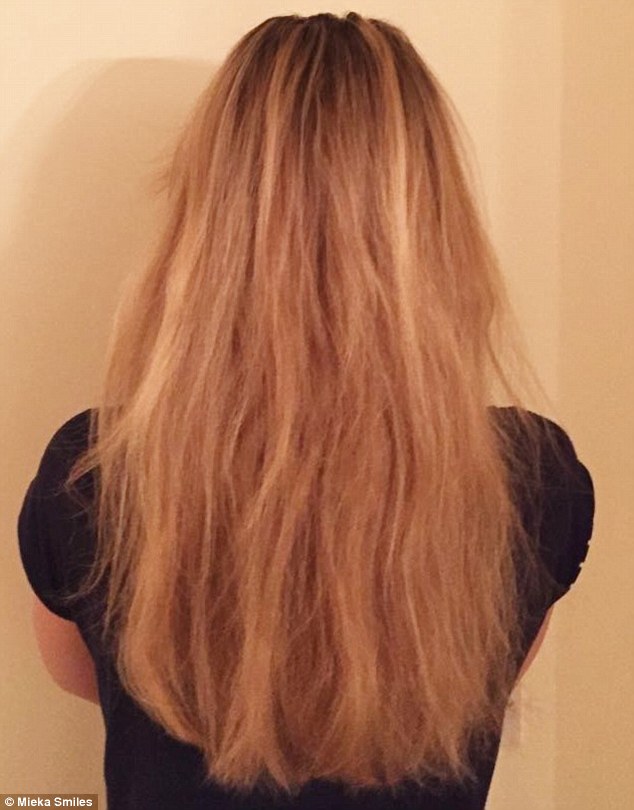 Week one: Mieka's hair is highlighed and in need of moisture, so the oil was good in that respect - but she didn't like applying it 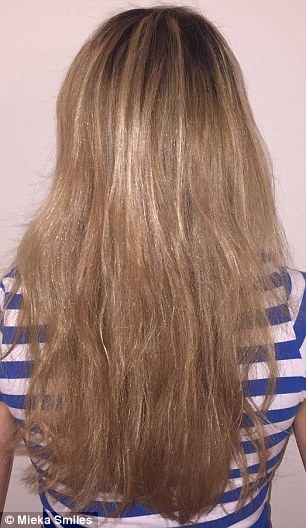 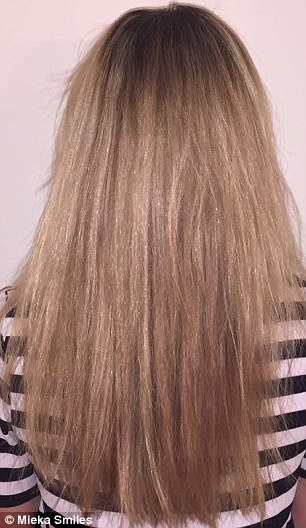 Week two (left): She found the oil difficult to remove in the morning and had to shampoo twice to get rid of it. Week three (right) She noticed her hair becoming softer and it looked noticibly sleeker

If I'd have had to go out of the house for an emergency midnight jaunt, I'd have been mortified.

Come morning, it was only two intensive shampoos that would shift the stuff. And I'd then need to heavily condition my hair that I'd scrubbed it within an inch of its life.

It made me wonder the treatment's worth, given I was nourishing my hair, only to strip it right back again.

But…my hair was noticeably softer and shinier after the rapeseed oil treatments. The extra conditioning possibly?

Given the rigmarole, I did keep the treatments to twice or three times a week as my school-run mornings are tight enough as it is.

Again the expense was minimal (around £2 a bottle) so perhaps worth a go if you have the extra time to spare. 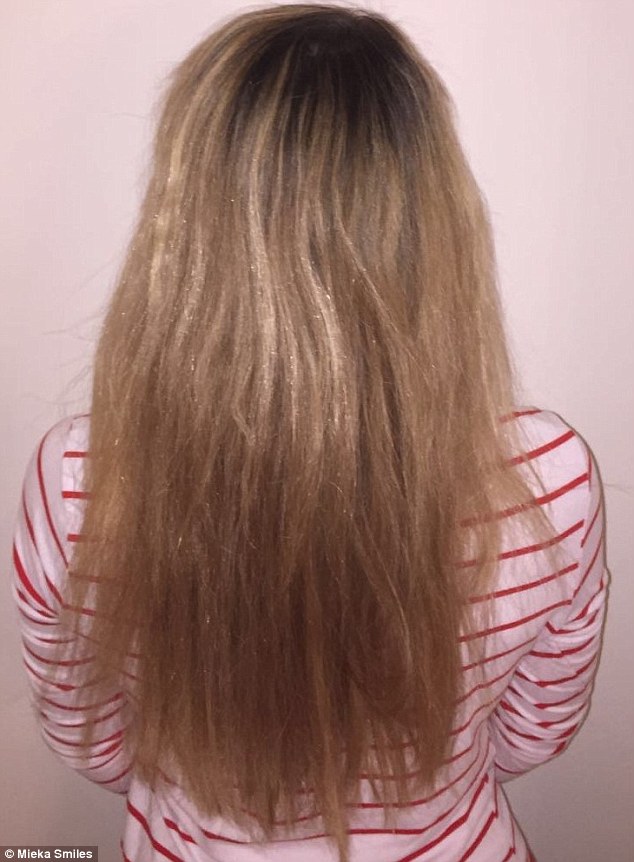 Week four: While she feels that it might be worth doing if you have the time and it's cheap at only £2 for a bottle of oil, she didn't enjoy the rigmarole of doing it

WHAT THE EXPERTS SAY

Dr Kalliopi Dodou is a senior Lecturer in Pharmaceutics and programme leader for the BSc Cosmetic Science course at the University of Sunderland.

Here she explains the science behind Yazemeenah's beauty trick.

She said: 'Olive oil has been used in skin care since ancient times for its moisturising and nourishing effects on the skin.

'This is justifiable from a biological point of view.

'The skin's external layer, the stratum corneum, is a lipophilic barrier protecting the skin from the external environment and also monitoring moisture loss from the deeper aqueous skin layers.

'Application of oily cosmetics on the skin surface will have an occlusive and emollient effect, preventing moisture loss and causing build-up of moisture in the skin i.e. a moisturising effect which can prevent wrinkle formation.

'Olive oil, especially the extra virgin type, is rich in fat-soluble vitamin E, which is a powerful anti-oxidant able to protect skin damage from air pollution. Due to its lipophilic nature, it can easily be absorbed in the lipophilic stratum corneum.

'The benefits and manifestations of olive oil application to the skin will depend on the extent of pre-existing skin aging, hydration status and presence of skin sensitivities.

'It will be more effective as a preventative measure to skin-aging rather than as an aging reversal intervention.

'Night application of olive oil to the skin is preferable to daytime application considering that it has no ingredients which can protect against sun damage. In fact, in some cases olive oil may cause skin pigmentation or sensitivities.

Talking about the benefits of rapeseed oil, she added: 'It provides an occlusive layer preventing moisture loss from the hair shaft cortex, therefore protecting against dryness, frizziness and formation of split-ends, to those suffering from dry hair and associated problems.'

Can OLIVE OIL help you look younger in one month?

The comments below have not been moderated.

The views expressed in the contents above are those of our users and do not necessarily reflect the views of MailOnline.

We are no longer accepting comments on this article.

Part of the Daily Mail, The Mail on Sunday & Metro Media Group